I touched the cold iron wrought gate that opened to the small yard leading to No. 42, Filey Street, I was not sure whether it was the sleet rain or tears that rolled down my cheeks that day. But I felt a big lump in my chest that got stuck in my throat and my eyes got very misty. It was the 27th of April. 2016, summer, in Sheffield, yet the rain that fell brought sleet n snow instead of water. The last time Afzal crossed these gates was in February, 2010, when he said goodbye to his friends and left to come home for good. 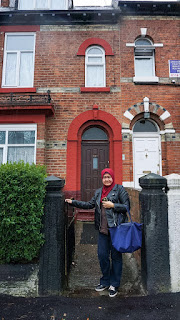 It was an unplanned trip to the United Kingdom, to accompany Jep and his family, but when I purchased the air tickets to London, it was clear in my mind that I would like to revisit No. 42, Filey Street, Sheffield. The journey from London to Sheffield brought back waves of memories, with familiar sights greeting me all along the way. I felt like I'm going "home". 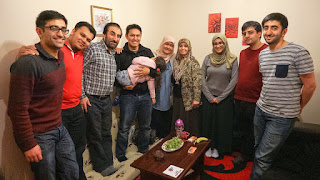 I toured Yafai, the grocery store opposite No. 42, Filey Street and chatted with the new owner, whose cousin manned the store back in 2010 ( but the new owner has heard of Afzal ), There were containers filled with "Nasi Kerabu" and "Beriani" on the cashier's counter, which I was told was placed there by Malaysian students. I bought one "Nasi Kerabu" and one "Beriani" and left to get ready to visit Eymen Kaya, a dear friend whose family took Afzal under their wings when he was sick.


I walked the streets of  the city, tracing the tramp route from the Sheffield University Station,had dinner at Popeye's on West Street and bought chocolates from Thorntons in downtown Sheffield. Although it has been 6 years since I was last there, nothing much has changed. It really felt like I'm visiting "home". 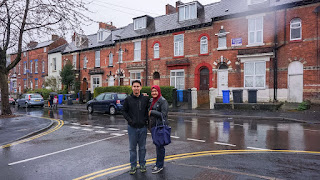 Today, you would have turned 32. I still miss you so much that it hurts. Being able to go back to where you spent many years studying, made friends and enjoyed life, meant so much. Thank you Allah for making it happen........Mama Afzal.
Posted by Mas Afzal Masarudin at 05:08

AlFarihah. We miss him very much too as he is very much a part of our lives.

I was his deputy of SMSA back then. Great leader he was..

Be proud Mama Afzal, as he is in a greater place now In Sha Allah

Al Fatihah. I never knew the mom neither the son. It must be hard when your own son left earlier than you. Keep strong!

May his soul rest in peace. Im sure Dato' arwah is doing fine up there. From your blog here, you are lovely mom and i adore you as a women and you are good example to us.

I keep checking for any updates. Be proud of him mama Afzal.Al Fatimah.

Auntie, please do update. I really miss it.

Auntie, please do drop a few lines. We really miss the updates in this blog

Assalamualaikum. I have not been able to log into this blog anymore. I will try to settle it and will be back with updates, in shaa Allah...mama Afzal


Salam Mama Afzal, please do share with us...look forward to hearing more from you. Fatihah to my beloved brother Afzal.

Salam Mama Afzal, what is your new blog? Al-Fatihah for Afzal.

Auntie, we love to hear from you. What is your new blog? Al-Fatihah to my beloved Afzal.

You'll never know how strong you are until being strong is the only choice you have left.
Mas Afzal Masarudin