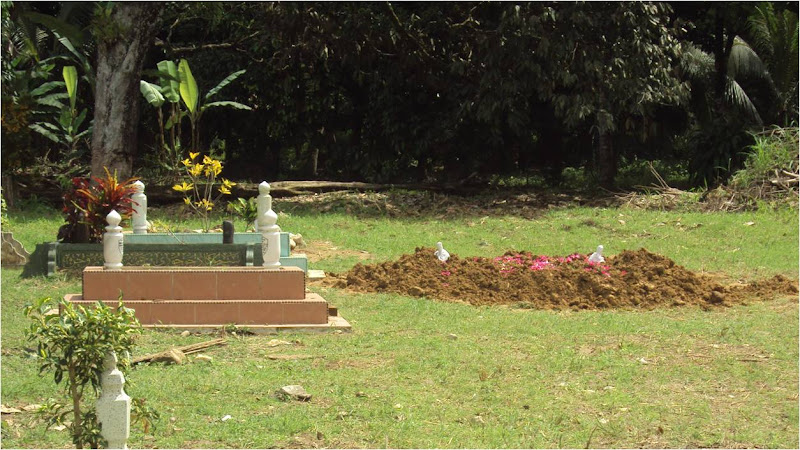 Afzal is laid to rest at the foot of his grandma's grave in Sungai Marong, Bentong. Pahang.
It has been 30 days since Afzal's passing, at 2.24am, 18th December, 2010. Memories of those 16 days I spent with him in Hospital Ampang kept playing in my head, over and over again and I thank Allah for giving me the opportunity to look after Afzal. I cannot help missing him but remembers his entry in January, 2010 titled "Time To Say Goodbye.."
The eyes tear
The heart is in pain
But (with my tongue)
I will only say that which is pleasing to Allah 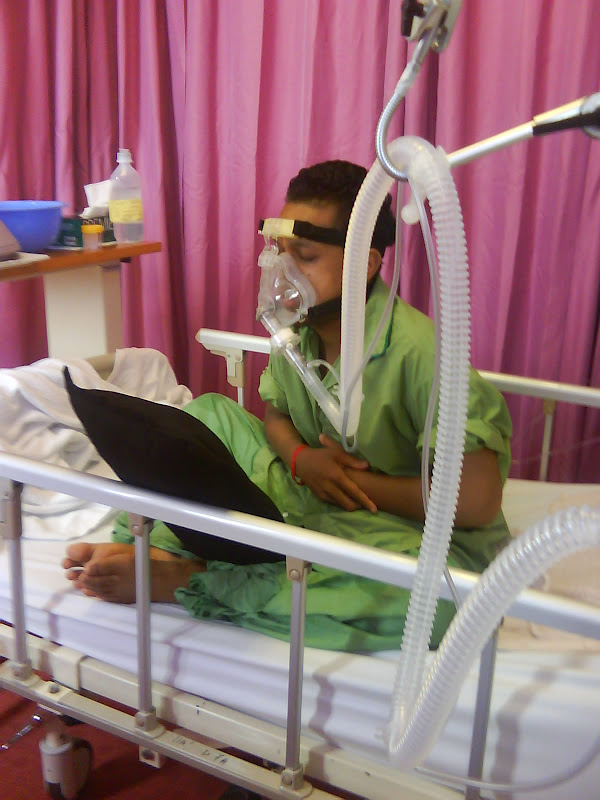 Day 2 at Ampang Hospital : Afzal Performing Maghrib prayers
He only slept one night alone in hospital, since he was admitted that was on the 2nd December, 2010. After that, I was with him for 10 nights and Andi (my eldest) was with him for 6 nights. They were nights that gave me an insight into part of what he must have had to endure alone, whilst being hospitalised in Royal Hallamshire, Sheffield, U.K. 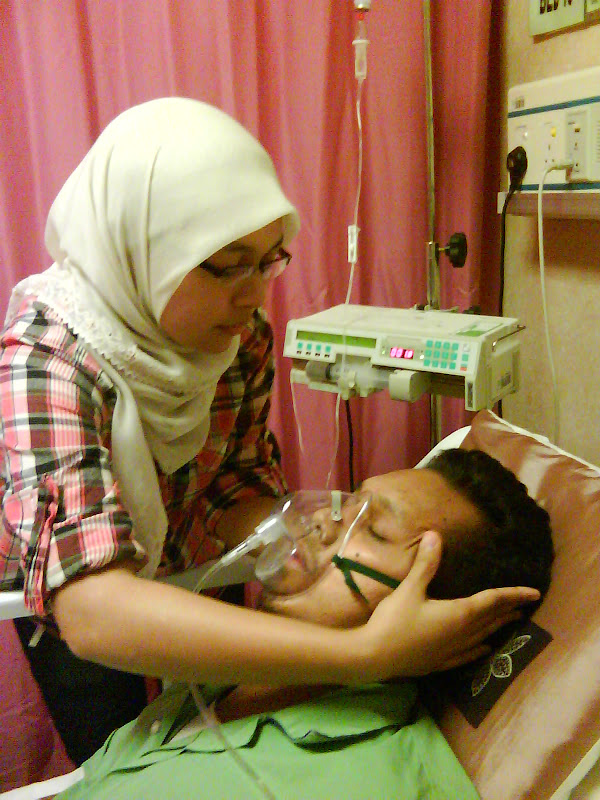 Aiysha's spa sessions : It's a routine that Afzal loves because it helps him sleep. The only problem is, he wakes up when Aiysha stops massaging him. Notice the different oxygen mask from the one he had on day 2. This is after one week when his breathing was better and he graduated to a less heavy-duty oxygen mask.
I would like for "Not the primrose path" to not fade away, but alas, it is not going to be possible for me or any member of my family to write the way Afzal writes. Allah bestows me with only one Mas Afzal. But, as I've received a few requests to pen down my experiences in bringing up my children, I thought, that would make a good start towards maintaining this blog.
I am amazed at the number of hearts that Afzal has touched during his short lifetime, something I have not succeeded in doing after more than half a decade scouring this earth. My husband and I often ask each other just what it is that he has done to warrant massive efforts by several old friends and new acquaintances to deliver kind comments and condolences via blogs, emails and fb, since his passing on December 18th, 2010. Basically, our conclusion is that he must have gone to great lengths giving people a helping hand in their times of need, be it in the form of physical/monetary assistance or advice/suggestions, sincerely. This knowledge has made me feel at peace coping with this loss. 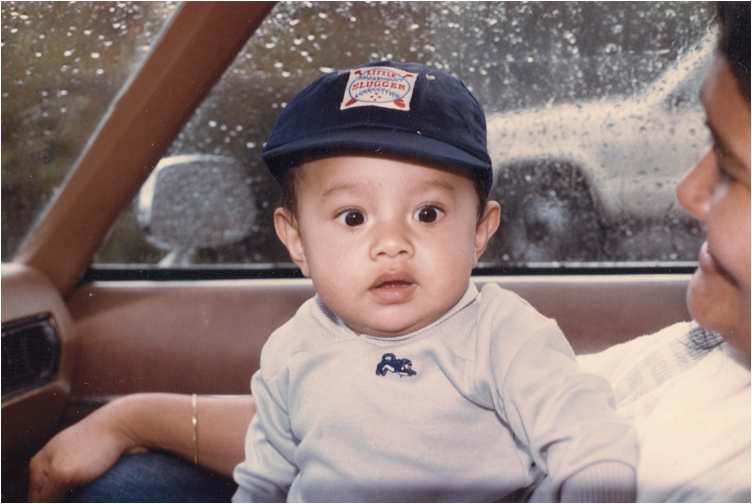 I felt like I carried Afzal for about 10 months before he was born on October 12th, 1984. When I was about 8 months pregnant, my husband had to leave for the United States to pursue his Masters. Since at that time, I also have 2 other young sons ( Mas Affendi/Andi – 2 1/2years, Mas Jaffri – 1 1/2 years ), we decided that I should move to Bentong and stay with my parents . I was then attached to the Ministry of Culture, Youth and Sports, with its office in Wisma Keramat, Jalan Gurney, Kuala Lumpur.

Every morning, I would take the 6 am bus from Bentong, to the Pekeliling Bus Station (its an hours journey), then walk to the Chow Kit area to get a taxi that would take me to my office. In the evening, I would usually try to catch the 5.30pm bus back home to Bentong. Every evening, my father and my two young sons would wait for me by the main road (my house is about 1 km from the main road) and each time I am not on the 6.30pm bus (either because I missed it or because it was full), my late mother would think that it's because I have given birth in Kuala Lumpur. But as fate would have it, Afzal was born in the wee hours of the morning in Bentong District Hospital, on October 12th, 1984.

To all working mothers out there, do not use pregnancy as an excuse to slack in your work. Pregnancy is not a disease. The more active you are, the easier it is to deliver. 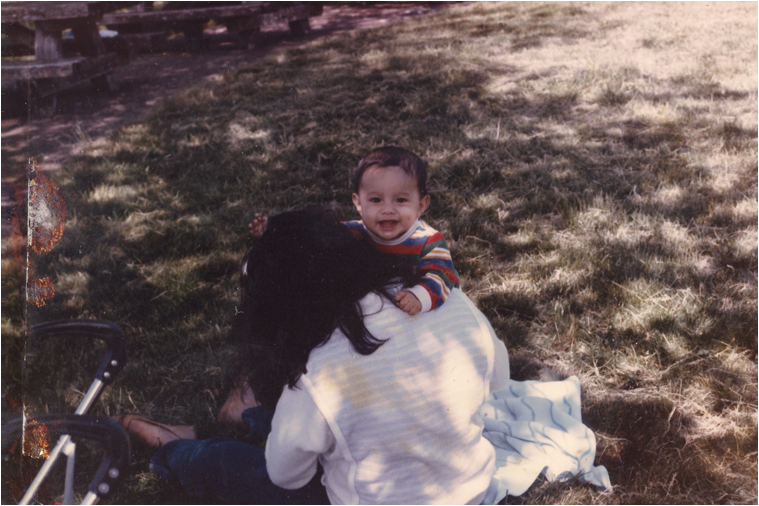 Never far away from his mother.

When he finally came, Afzal was a whopping 8lbs 12 ounces baby with a big voice, but I delivered him normally, without much hassle.I remember the midwives in the ward where I was staying were fighting for turns to bottle feed him because he's big, so he was so cuddly to carry. Since papa was not around when he was born, I got the priviledge of naming him (the only one among my 3 boys that I get to name exclusively).

I chose the name Afzal, after an impressive Islamic Scholar Afzal Iqbal, whom I met during an Islamic Civilisation Seminar organised by my Ministry then (but Afzal Iqbal sounded too Pakistani, so I opted only for Afzal and added the signature “Mas” to it).

When Afzal was about 3 months old, we left for Eugene, Oregon, United States and stayed there for 1 year 10 months. Taking care of Afzal was such fun. Whenever we travel in the U.S, he would sit in his car seat n “sing” himself to sleep. He loves his milk and orange juice, and he loves to follow whatever his two brothers did. 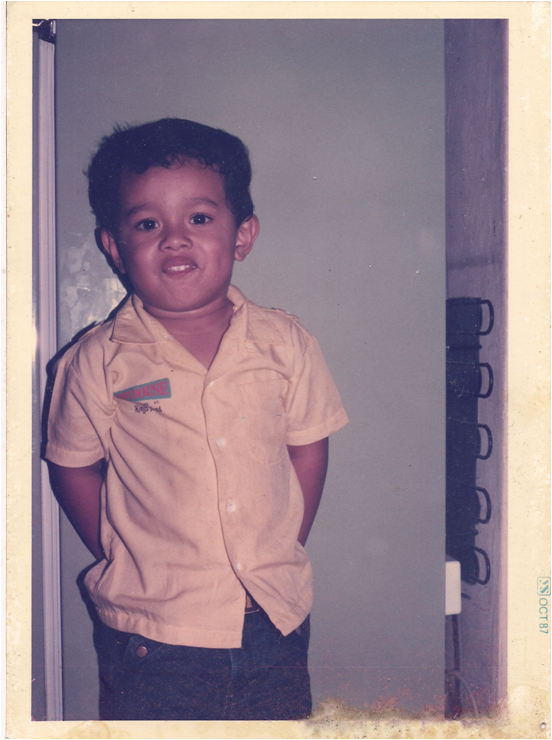 Afzal, 2-years old, back in Malaysia.

I took unpaid leave to follow my husband because I was not “qualified”(I was not confirmed in service yet then) to be given a scholarship to pursue my own Masters. When my leave expired, I decided to go home to Malaysia, eventhough my husband still had a further 3 months of studying. Since by then MAS was operating a direct flight from Los Angeles to Kuala Lumpur, via Tokyo, I felt I could cope with the long haul, while taking care of 3 young sons( Andi- 4 1/2years, Jaffri 3 ½ years, Afzal coming to 2 years).

My husband drove us to Los Angeles and I took the flight via LAX Airport. While on transit in Tokyo, we were the last passengers to leave the plane and we were also the last passengers to board the plane when it was ready to depart for Kuala Lumpur, because I had a hard time pulling my 3 mischievious boys away from the attractive toy stores at the airport. I must have been the loudest mother in the airport back then, always shouting at my sons to not stray. Being boys, it was not an easy thing for them to do. I was very lucky because my boys are very good mannered eventhough they are very, very inquisitive (always curious and eager to poke around and explore . Jaffri, the most inquisitive would lead, Andi, the ever macho brother would be the guardian and little Afzal, the ever so willing follower!). To help me make it through the flight, I brought along toys that could attract my children's attention so that they would not get bored.

So, to all young mothers out there, never use the excuse of having many young children as a hindrance to doing things or going out and living life. It's all a matter of planning and believing.

Posted by Mas Afzal Masarudin at 00:58 81 comments: Links to this post