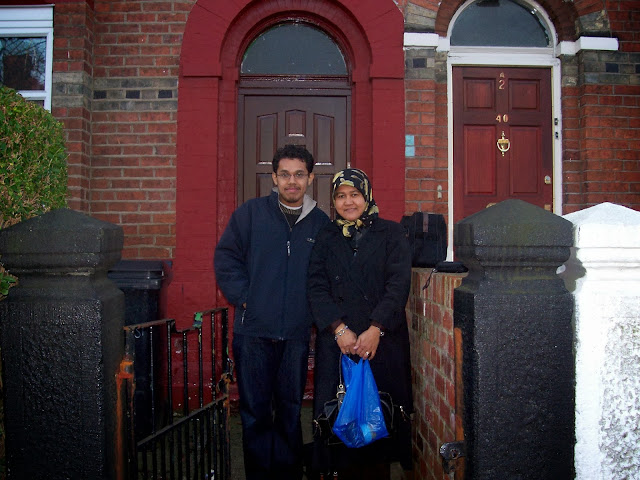 November, 2005 marked the first time I visited the house at number 42, Filey Street, in Sheffield, United Kingdom. Like most homes rented by single boys or men, the house is humbly furnished and probably only cleaned 3 or 4 times a year ( I'm exagerating!). But somehow, this humble house is a home that I will treasure for always.

This was Afzal's home for 5 years until he came home in February, 2010. For more than 4 years he took up a small room in the attic - the smallest of 5 rooms in the house! One had to climb 3 flight of stairs  with 2 landings before reaching Afzal's room ( I cannot remember exactly how many steps we had to climb, but it is a steep climb). The only window in the room opened out looking into Uncle John's garden ( I do not remember if Afzal actually told me his name, but I like to remember him as Uncle John). There were several occasions when I saw Uncle John tending to his small garden, even during the cold winter mornings, though I had never actually met him in person. In the far distance, one could also see the ArtsTower (I think that's what it is called), Sheffield University from this window. Once, in September, I even saw a neighbour holding a barbeque! I remember in December, 2008, when I was there with Jep, I saw a black cat scaling the perimeter wall that served as a boundary between houses in that Broomhall neighbourhood and I was frantically calling for Jep or Afzal to come to the window to witness this seldom seen phenomenon in the UK (honestly, I did not see any cats in the streets of London or Sheffield as I see them in Malaysia!)...but none could share the moment with me for both were down and out - Afzal from chemo and Jep from food poisoning.

When I first visited 42 Filey Street in 2005, it was just because I wanted to see where Afzal lived. I did not even sleep in the house. Instead, I stayed in one of Afzal's girl friends' house further down the same street. The one thing about 42 Filey Street that made it an extra special house was that it was right in front of a grocery store that sells halal products - Yafai! It is so conveniently located that I loved cooking at 42, Filey Street because most of my cooking needs were just a few metres away ! I remember when Afzal first brought me to the store to buy chicken. He first greeted the shopkeeper in Arabic. We then proceeded to a basement-like part of the store where the butcher was and the butcher said "...how many kilos? skin off? small cuts?..." Afzal replied "..yes, the usual..". Afzal said his housemates and he did a lot of cooking to save on expenses, besides it helped satisfy their cravings for Malaysian food.

When I started coming to Sheffield to care for Afzal, after he got sick, there was no question as to where I should be staying in other than at no. 42, Filey Street. December, 2008, marked the first time I slept in this house, but not in the room in the attic yet! One of Afzal's housemate, M (Ahmad Khairudin) had gone back to Malaysia on holiday and had graciously offered us his spacious room (it's the master bedroom). We stayed there for a week before actually moving to the attic room.

As there were 3 of us, and it was winter, my boys decided that I get the bed and the two of them slept on the floor. There was enough room for just the 3 of us, besides the basic study table, chair, closet and small cabinet for Afzal's knick knacks. I remember Afzal said, "don't worry ma, I bought a lot of duvets which was on sale, we won't be cold sleeping on the floor!" However, being at the top most part of the house, it takes effort to move up and down, especially when one required something from the kitchen which was on the ground floor. As such, we kept enough food and drinks in the attic room when we retired for the night but were still not tired enough to sleep.

As I laid on Afzal's bed, occassionally looking at him, sitting at his study table (on his good days in-between chemos), revising and catching up on whatever he missed as he prepared for his exams, I could not help but marveled at how Afzal must have loved his attic room. The walls and ceilings were full of wise words, quotations, quranic verses, birthday cards, family and outing pictures, phone numbers and exam schedules. But what touched my heart most was a piece of paper detailing his targeted savings from the day he started receiving his scholarship to the day he was supposed to graduate and return to Malaysia. He made a list of all his committed expenses - house rent, utility bills, food needs, donations (I found out that he sponsored a child through monthly deductions from his bank account) and calculated an estimated amount that he could save monthly and bring home when he finished his studies. It suddenly dawned on me that this was the reason why he had never asked my husband or me for any additional money to support him while in the UK. The only money that I ever gave him were when he first left Malaysia in 2004 and during his yearly trip home during his breaks. Sometimes I wondered if there were ever anything he liked or wanted but did not buy them because he was on a tight budget. When I queried him about it, Afzal said "I do go shopping Ma, but I wait till there's a sale on and I only buy things that I need not just want!" I remember he used to nag my daughter who loves to shop for shoes..."How many shoes do you need Aiysha?"

I did say Afzal stayed for 5 years at 42, Filey Street. Well, after he finished his exams, he had to give up the  attic room because the contract had expired. However, his gracious landlord allowed him to stay in the living room. All his housemates agreed to give up their living room so that Afzal did not have to move out while still receiving treatment and undergoing medical training. That is how much blessing Allah bestowed upon my son, living on foreign soil. I only saw Afzal's landlord, Mr. Abdullah, twice during my visits there, though we were not formally introduced. On occasions when I stayed at 42 Filey Street, I never failed to help clean up the place, especially the kitchen, trying to make it look more like a home to all the occupants whom I considered as my children too....and I could not help but noticed Mr. Abdullah's surprised but pleased look when he saw the gleaming kitchen floor (I had scrubbed it back to its original floorboard colour the day before) during one of his visits!...and that made me feel so good.

Now, not one day passes by without me thinking of Afzal. As much as I have accepted his passing as the will of Allah, I cannot help but miss him terribly. There are so many things I wished I had done with him or for him. Remembering his beautiful smile will always bring tears to this tired eyes. However, it helps to reminisce on how he had lived a fruitful and enriched life at 42 Filey Street, and Allah willing, I would like to revisit this home again some day!...Mama.
Posted by Mas Afzal Masarudin at 07:16 16 comments: Links to this post